Blog | July 2019 | How Much Power Does a Solar Panel Produce

How Much Power Does a Solar Panel Produce

How much solar power does a solar panel produce per square foot? This isn't just a trivia question. It goes to the heart of figuring out what size solar panel system a homeowner needs. And it factors into the cost because the price of a photovoltaic (PV) solar system is partly determined by the kilowatt hours (kwh) of the system — how much power the solar panels can produce.

How Solar Panels Are Made to Function in Real World

To understand how much solar power is produced per square foot it’s helpful to know what solar panels are made of. SunPower® solar panels are the most efficient you can buy.1   Our Maxeon® solar cell technology combines a strong copper backing with ultra-pure silicon and a light-trapping glass surface that ultimately makes our panels 30 percent more efficient at generating energy than conventional panels.

You might think it’s a simple math question: If a solar panel is rated to produce, say, 360 watts, and it's about 3-and- ¼-feet wide by 5-and- ½- feet long, then each square foot must produce about 20 watts, right?

Not exactly. The real test of a photovoltaic (PV) solar system is how well it works in real world conditions. To produce the maximum amount of power per square foot, a solar panel has to be well designed to handle temperature, spectrum, angle and amount of light.

Temperature: Some people associate solar power with heat because heat is associated with lots of sunlight, but if there’s too much heat, your solar panels may not work as effectively. Once temperatures rise higher than about 77 degrees Fahrenheit, there's always some drop-off in power production. But SunPower's panels are designed to minimize these losses in energy production. Our panels have a low "temperature coefficient," or heat-related energy decline, so power production losses due to high temperatures are minimized.

Spectrum: Cloudy days are a fact of life, but – contrary to what some think – solar panels do work on cloudy days. That’s because there's a wide spectrum of light. Some of it is visible to the human eye, and some of it, like infrared and ultraviolet light, is invisible. Clouds may block a lot of the visible light, but they don't block out the entire spectrum (which, incidentally, is why you still get sunburned on a cloudy day). SunPower panels harvest more infrared and more ultraviolet light than conventional solar panels. So as a homeowner you’ll need fewer panels on your roof to produce the energy you need.

Angle: Each solar installation is unique because your home has a specific orientation to the sun. Solar installers usually install solar panels facing due south to capture the most direct sunlight. But even the sun’s rays will always hit at different angles some of the time. Most solar panels are built with "anti-reflective glass," which means once light enters the panel it will bounce back into the solar cell to harness as much power as possible. The anti-reflective glass on some panels can degrade after long exposure to weather, but SunPower's panels are known for their low degradation rate.2 Extensively tested high-quality components like anti-reflective glass are one reason SunPower's panels have the most comprehensive complete-system warranty in the solar industry. 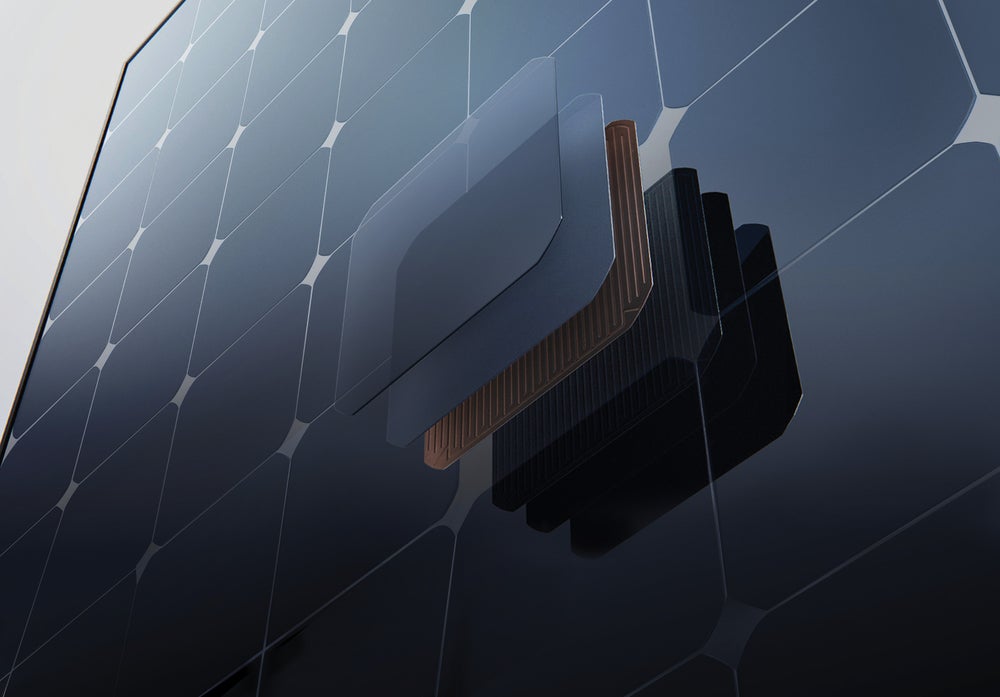 Amount of light: Solar panel production peaks around noon, but this can vary based on your location. Shading from trees, dust, leaves and other obstacles can obscure light, affecting solar panel power output. Shading can not only hurt power production, it can damage a solar panel over time. Most solar installers, especially SunPower Master Dealers, will find a way to avoid shading to make power production efficient. And having solar panels that are 30 percent more efficient than competitors means you can use less roof space, so panels won’t have to be installed in shady spots. SunPower’s Equinox™ solar system’s panels also come equipped with microinverters on each panel, so if one panel is shaded, the others can make up for that slow-down in power production.

So how many square feet of your roof will your PV solar system cover? Because of the variables, pinning down exact numbers is tough. But at 20 watts per square foot, a system rated to produce 2 kilowatts would cover roughly 150 square feet while a 3kW system would take up about 225 square feet. Each solar installer has sophisticated software that can spell out your house's exact power needs while looking at historical weather patterns, roof angles and other factors to tell you how many panels you'll need and how much power your they'll be able to generate per square foot.

Do you have limited roof space? Our newly released A-Series panels incorporate the best of our high performing, reliable technology into the world’s first ever 400 and 415 watt commercially available residential solar panel. A-Series panels are an excellent choice if you want to get the most energy from your roof in a constrained space, maximizing your electricity bill savings.

When you get the solar panels installed, keep in mind that you'll want a system that generates the highest amount of power you can afford – or that will fit on your roof. The more power generated, the faster you can pay off the system and start saving the maximum amount of money.

1 Based on datasheet review of websites of top 20 manufacturers per IHS, as of May, 2019.