In 1997, Garry Kasparov was defeated in a six-game chess match by IBM’s Deep Blue supercomputer, marking the first time that a reigning world chess champion had lost a match to a computer. While humans put up a valiant fight over the following years, it became clear by 2006 that computers are superior in evaluating a quadrillion potential moves and outcomes more quickly and effectively than even the best human chess players.

This makes sense to us today. We know that computers are critical tools and superior to most humans in analyzing innumerous amounts of data and possible scenarios and in guiding us to make the most informed decisions.

From our perspective as a global leader in solar, SunPower compared this evolution in the world of chess with how the solar industry typically develops utility scale solar. There are a quadrillion possible tracker layouts to consider when you’re planning a solar plant, but time and resources necessarily limit the evaluation process. Given the financial investments our customers are making in these projects, we want to be certain they’re making the most informed decisions to achieve success. How can you select the best possible design if you haven’t had the opportunity to evaluate all the possibilities?

Today, SunPower is solving that issue and more with the launch of the third-generation SunPower® Oasis® power plant for utility scale solar.  It takes the uncertainty out of development and design and quickly and efficiently delivers a solar power plant that achieves financial goals by optimizing site utilization, lowering costs and maximizing energy production.

The new product is based on SunPower’s first-generation Oasis power plant that launched in 2010, as well as on previous iterations of tracker technology that we have been installing since 2004. As a result of this legacy product, generating more than 2.5 gigawatts of solar power at plants operating worldwide today, SunPower is in the unique position of applying a dozen years of power plant data and customer experience to develop this latest power plant technology.

From project development through operations and maintenance (O&M), the Oasis power plant optimizes return on investment with the following features. 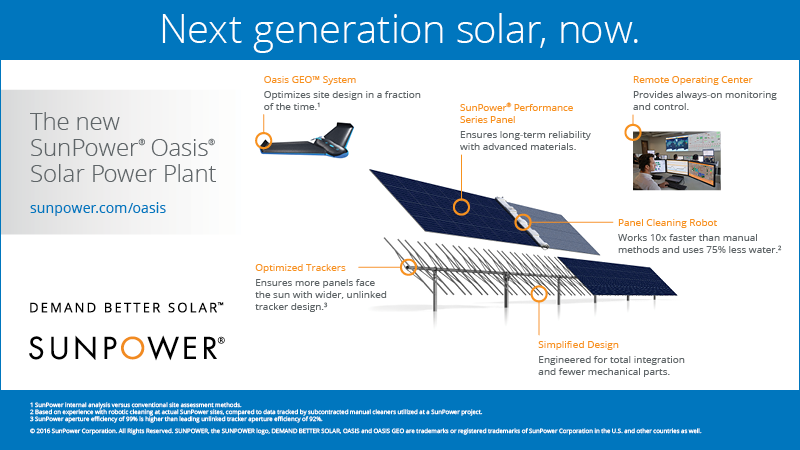 Re-engineered to Optimize Site Use

Oasis tracker rows are now un-ganged, or not linked, enabling each row to track the sun at the optimal angle throughout the day. Each row measures four meters wide by 45 meters long, which is twice as wide and half the length of typical un-linked trackers. The distance between rows measures six to eight meters.

Oasis trackers also offer an increased range of tracking motion of approximately 60 degrees, compared to conventional trackers that are restricted to a 45-degree range of motion.

The improved Oasis power plant design delivers a number of customer benefits, including:

More than half of solar power plant energy deficits come from installation faults. That’s often the result of inexperienced crews piecing together parts developed in isolation by numerous manufacturers. SunPower’s design philosophy is different; we believe that when technology is built to work together, it works better.

Value engineered to make the complex simple, the Oasis power plant features a fully-integrated design focused on quality. With more than 50 percent fewer mechanical parts, a plant is constructed more quickly and is more reliable over the long-term. For example: 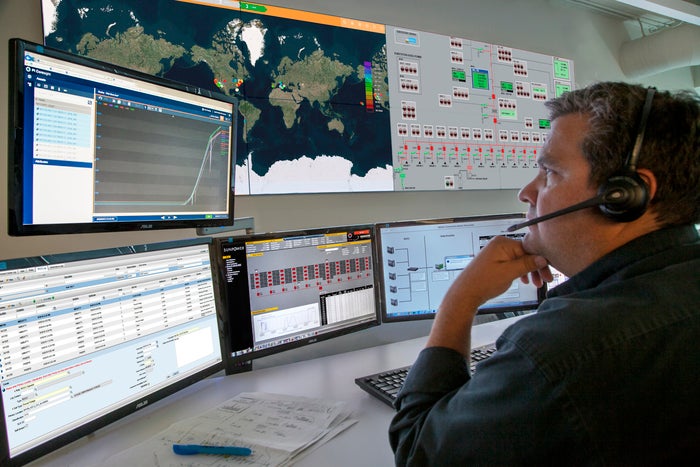 Soiling can be a leading source of potential revenue loss for solar power plant owners, and manual cleaning takes time and disrupts daytime energy production. SunPower’s robots are expected to be able to clean 10 megawatts of Oasis panels in 10 hours with three workers at night, 10 times faster than manual cleaning methods used by competitors.

SunPower’s Remote Operations and Control Center (ROCC) offers 24/7/365 site monitoring and control, optimizing energy production to allow customers to better manage their energy. We project that the ROCC will be monitoring and controlling more than 1.8 gigawatts of solar power plants around the world by the end of 2016.

The new Oasis power plant SunPower announces today represents an unprecedented integration of hardware and software for solar power plant design. It builds on the foundational success of earlier generations of Oasis, making the complex simple, and incorporating groundbreaking new features to ensure customers can make the best decisions to optimize their investments and achieve their goals.

Similar to the effect that computers had on the game of chess, applying data acquisition and analysis to the design, construction and operation of solar power plants is a natural progression that enables smarter, more efficient planning and outcomes. While Kasparov surely felt the sting of his loss to his non-human competitor, we welcome the opportunity to use advanced technologies to add value for our customers and to fight against climate change. Somewhere, Deep Blue is smiling.