California led the way in job growth, according to the census, but 33 states, including the District of Columbia, added solar jobs over the past year, and many states experienced double‐digit growth, including Utah, Colorado, Rhode Island and South Carolina.

The Solar Foundation projects that the solar industry will add more than 30,000 solar jobs in the U.S. this year, so if you’re a student or job seeker, now might be the time to pursue a career in solar or a related green energy field. 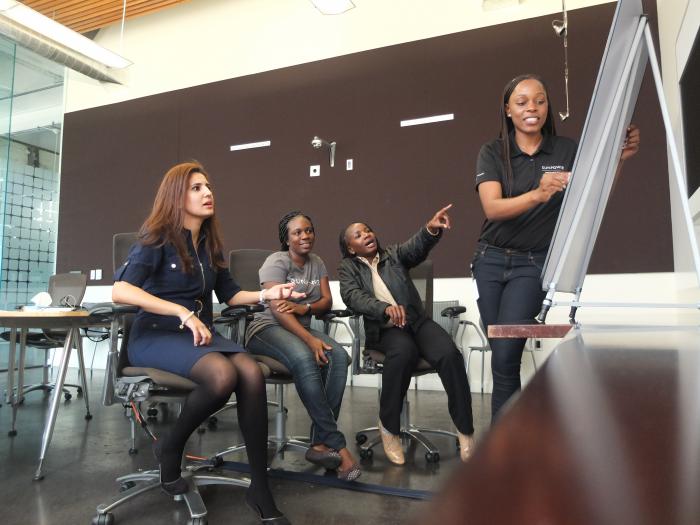 The majority of solar jobs, according to the Solar Foundation, are in installation (57.4 percent), followed by manufacturing (14.5 percent), sales and distribution (11.7 percent) and project development (10.7 percent).

SunPower, which designs, manufactures and sells solar panels, employs thousands of people in North America, Europe, Africa, Asia and Australia. In addition to the thousands of employees we have in manufacturing, we hire hundreds of people in engineering, sales, finance and services and support.

Many skill sets are needed in the solar industry, and everyone plays a part in bringing the power of the sun to more homes and businesses worldwide.

Your education is the most important hiring requirement. About 35 percent of solar positions require a bachelor’s degree or higher.

For example, there are roles for candidates with education and experience in science and engineering, research and development, project planning and development, data analysis and environmental stewardship. Some STEM (science, technology, engineering and math) education or training can be helpful.

Additionally, business skills, including administrative, data modeling, operations management, marketing, sales, software development, supply chain and finance, can be valuable in an industry that is growing quickly and adapting to the market.

Installation and manufacturing jobs require hands-on skills, including physical labor, and having equipment and materials knowledge. Since employers report having a hard time finding experienced solar workers, though, a willingness and ability to receive training, along with some related and transferrable skills, could get your foot in the door.

Within the United States, the top five states for solar jobs are California, Massachusetts, Arizona, New York and New Jersey. California has the most solar installations and jobs by far, with more than 75,000 jobs, up 38 percent in 2015. In Massachusetts, which ranks second for solar jobs, more than 15,000 people work in solar. Basically, wherever the number of solar installations are increasing, solar companies are hiring. You can see how your state ranks at the Solar Foundation’s site.

SunPower, which has its headquarters in the heart of Silicon Valley in San Jose, CA., also has a large office in Austin, Texas, where we’re always seeking qualified candidates.

Here’s a job description on our LinkedIn page for a Power Electronics Engineer based in Austin. This position is for someone who could support developing power electronic converters and associated controls for microinverters at SunPower.

College students can apply for internships in the solar industry. Adults looking to change careers can get training at community colleges or on the job as they work their way up. And, of course, you can apply directly for jobs at solar companies such as SunPower or at any of the thousands of installation firms across the country or around the world.

Start with your favorite job search site and search for the word “solar” and see what you find. You may be surprised by the tremendous variety of roles available and how your skills and interests match up.