Blog | May 2015 | Realizing the Dream of Non-Stop Solar Flight

Sometimes, in this age of rapidly-changing technological advancements we live in, it seems like we’ve lost that sense of wonder and enchantment previous generations felt when the Wright brothers took off for the first time in a powered airplane, or Neil Armstrong became the first human to set foot on the moon. Well, the days of awe-inspiring discoveries and record-breaking journeys aren’t over. In March 2015, the human adventure continued as the revolutionary Solar Impulse 2 sun-powered airplane embarked on the first-ever around-the-world solar flight.

The Solar Impulse project, founded and run by Swiss visionaries Bertrand Piccard and André Borschberg, set out to demonstrate to the world that alternative energy sources can achieve what many have considered to be impossible. Solar Impulse 2, the culmination of 12 years of research and experimentation, is an engineering triumph capable of flying non-stop, day and night, powered only by the sun. The only flight limit is the pilot’s endurance.

Piccard and Borschberg hope to not only make history, but in doing so “encourage and inspire each and every one of us to become pioneers and explorers in our own lives, and to invent a brighter future.” 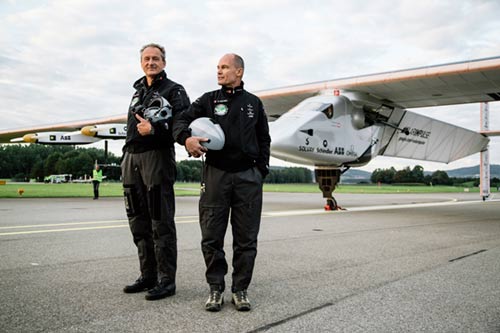 A partnership of pioneers: SunPower solar cells power the dream

SunPower is beyond thrilled to be the official supplier of the solar cells that power the Solar Impulse project. Our Maxeon® solar cell technology, the same technology we use in our residential and commercial panels, was selected because of its industry-leading efficiency, weight and thickness, an average of only 135 microns—this is critically important for the power-to-weight ratio of the aircraft.

The solar cells power the electrical engines of the plane while recharging lithium batteries for night flying. Solar Impulse 1, the project’s prototype plane, proved viability by setting eight world records—including becoming the first solar airplane ever to fly through the night, between two continents and across the United States—operating more than 24 hours non-stop without any fuel except sunlight, and with no emissions whatsoever. Solar Impulse 2, the plane that will attempt the around-the-world flight beginning in March, uses 17,000 of the SunPower solar cells and will need to be able to sustain non-stop flight for up to five days at a time. 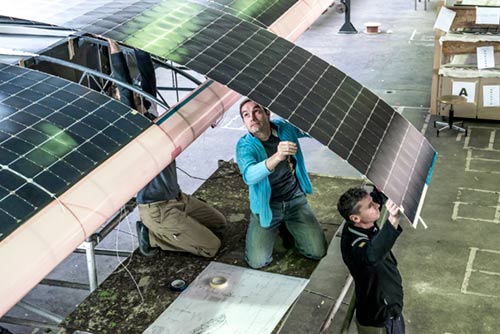 With a wingspan of 72 meters, greater than that of a Boeing 747 jumbo jet, and weighing only about as much as a car (2,300 Kg), this revolutionary airplane made of carbon fiber is being hailed by experts as a technological wonder. A plane so big and light has never been built before.

Borschberg also points out something that we at SunPower find just as exciting as the around-the-world flight: Many of these technologies can also be applied to other sectors. We believe in solar’s incredible potential, so we see endless possibilities for the Solar Impulse project’s innovations, reaching far beyond aviation. 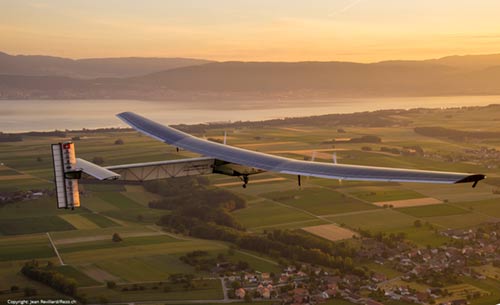 The pioneering spirit that drives the Solar Impulse team and SunPower’s engineers is the same spirit that fueled countless “firsts” throughout history. It’s the irrepressible urge to invent new technologies, break through boundaries, and show the world what human courage and ingenuity can achieve.

Since the time of Magellan, the dream of circumnavigating the globe has inspired adventurers of all kinds. Daring explorers have made the journey in sailing ships, submarines, hot air balloons, powered aircraft, and now a solar-powered airplane.

Borschberg and Piccard, along with the 80-plus members of the Solar Impulse team, say they want to inspire the same spirit of imagination, innovation and exploration in others. Consequently, just as important as their groundbreaking research is their tireless outreach to world leaders and energy influencers—many of whom will sponsor or host Solar Impulse 2 in the course of its circumnavigational flight—to spread the word about clean energy solutions and the boundless potential of solar.

Follow Solar Impulse’s round-the-world adventure at SolarImpulse.com to see this once-in-a-lifetime event unfold. For the next leg of the trip, Borschberg will fly five straight days and nights from Nanjing, China to Hawaii.