This summer I traveled more than 3,200 miles, solo, on my solar bike from Ventura, Calif., to New York City to raise awareness about solar energy and healthy living.

One of the greatest takeaways from the journey was that solar technology works. The SunPower® panel flawlessly charged the electric bike’s battery, giving me an unlimited range. And it provided so much more, a visual hook for curious minds to learn more.

Here are the few fast facts from my solar bike adventure:

But there is so much more to this odyssey than can be portrayed by just the numbers. It is the impromptu conversations that have colored my days.

The rig did its job. It acted as a conversation tool, drawing in curious people and activating their minds.

You could think of my solar bike as the white ball, the cue ball, in a game of pool. I’ve bumped into more than 300 solids and stripes along the way and through our dialogue, perspectives on solar have rolled in new directions.

In California, Arizona, New Mexico, New Jersey and New York I ran into more solids – people who could see that I was on a bike with a solar panel. Therefore, the conversation was focused around:

While the solar panel was evident for the solids, many were stumped as to what I was actually charging. The assumption was that I was using the panel to charge my phone, computer and camping appliances.

Specialized has done a phenomenal job seamlessly integrating the motor and battery into the Turbo S electric bicycle. Add me to the picture, wearing a cycling outfit and pedaling alongside the motor, and I understand why it might be hard for people to see that I’m riding an electric bike. It’s a stealthy, quiet, clean machine.

As I rode through Texas, Oklahoma, Arkansas, Tennessee, Virginia and Pennsylvania, more stripes started coming into play – people who were not quite as solid or as confident as to what I was riding. Some of my favorite comments:

I realized that in many states solar energy has not yet become visible. It was the greatest reward to be a solar ambassador. Next time they see a magic solar panel, they will know that it is producing clean energy.

Once I reached New York, I added a little blue chalk to my pool stick to make the impact of solar more powerful. Engineer Kingsley Chen at SunPower and my CTO, Dad, rose to the occasion once again. They created a bypass from the solar panel so I could use the power it generated to run a blender.

I blended solar-powered smoothies outside Patagonia, Lululemon and at a farmer’s market in Union Square. People were able to witness the power of the sun as they drank an ALOHA smoothie. It was the best way to engage more people, celebrate solar energy and share tales from my epic adventure. 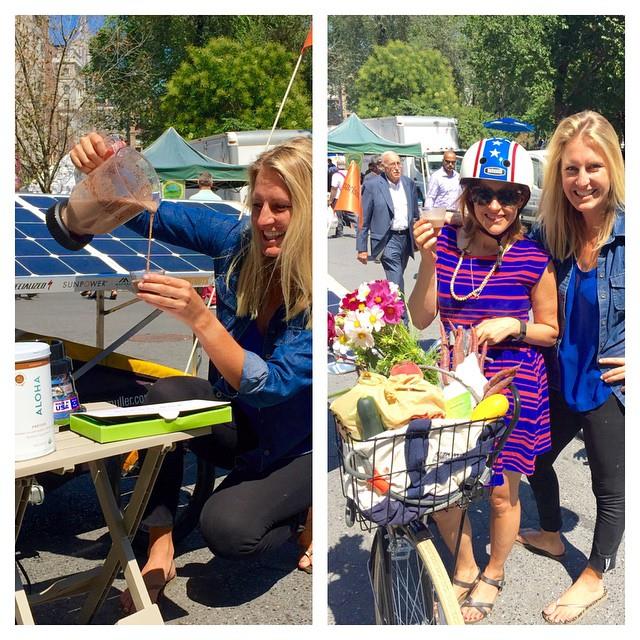 And the eight ball – the winning shot to my solar bike adventure – is that I am not an out-of-sight, out-of-mind paradigm. I hope I left a strong enough impression not only on the people I met along the way but also on those who heard my story through the media, and that they take the next step to explore if solar is right for them.

It’s time to break free from traditional power sources and discover the clean energy of the sun.